One of these days, I’m going to start another blog and call it The &%#@ Idiot Award.  Every day, I will accept nominations, let my readers vote, and at the end of the week hand out the prizes.  This week, however, there is simply no competition.  Congratulations, Megyn Kelly.

Just to set the record straight:  The myth of Santa Claus has its origins with Saint Nicholas, who was Turkish.  Jesus of Nazareth was from, well, Nazareth.  If you want to know what color Jesus and Saint Nicholas were, get out of the studio and go make friends with some people from Nazareth and Turkey. 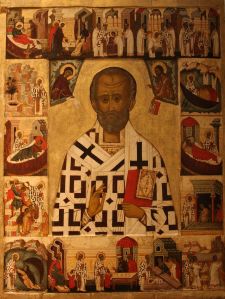 He just doesn’t look that white to me.

And now, I will do my best to put my evil snarky twin back behind the filter and return to my usual pastoral self.

Reza Aslan, author of Zealot, makes a distinction between the Jesus of history and the Christ of contemporary Christian movements.  He points out (with a smile) that the Jesus of history, being Galilean, would have looked like a Galilean; that is, the same hair, eye, and skin color as Reza Aslan.  The Christ of Christian movements, however, looks like whatever a particular Christian culture projects upon him.  In China, Jesus looks Chinese.  To Guatemalans, Jesus is a migrant worker, and to many white American suburbanites, the Christ of the prosperity Gospel is an affluent white man.

I have to disagree.  There is a third way.  Whereas the search for the historical Jesus has focused on the man from Nazareth who stands behind the scriptures, and the malleable Christ of culture takes the shape of wishful thinking of Christians, the Christian scriptures describe Jesus as the Jewish Messiah (Christ) with specific and uncompromising theological claims.  Whether those claims are believable or not, they are not malleable.  My agenda here at The Bible Is My Crazy Uncle is not to talk anybody into agreeing with any of these theological claims; rather, my agenda is to discern what those claims are and state them clearly.

My boredom with the quest for the historical Jesus, from the Jesus Seminar to Reza Aslan, grows out of its speculative conclusions.  While it would be fascinating to travel back in time to the first century, shoot a lot of video, audio, and photos, maybe take a selfie with Jesus and a few of the disciples, that’s science fiction.

Once we move upstream from the collection of manuscripts we have inherited, we have to make a huge leap to get back to the historical Jesus.  Though there may be only 30 years between the earliest Christian texts (1 Thessalonians, for example) and the death of Jesus, those 30 years incubated a radical transformation.  A small community of Jews who believed that Jesus of Nazareth was the Messiah transformed into a multicultural community of Jews and Greeks and North Africans spread out over a huge geographic area.

Here’s the question of the day:  Do the words of the historical Jesus, to the extent we can discern them, hold more importance for you than the words of New Testament writers?